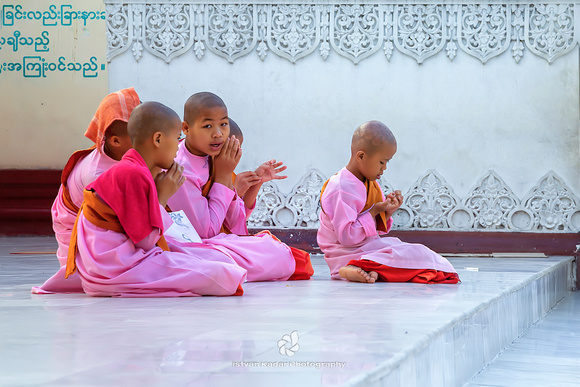 A thilashin ("possessor of morality") is a female lay renunciant in Burmese Buddhism. They are often mistakenly referred to as "nuns", but are closer to sāmaṇerīs "novitiates". According to 2016 statistics published by the State Sangha Maha Nayaka Committee, there were 60,390 thilashin in Myanmar.

Like the maechi of neighbouring Thailand and the dasa sil mata of Sri Lanka, thilashin occupy a position somewhere between that of an ordinary lay follower and an ordained monastic. However, they are treated more favourably than maechi, being able to receive training, practice meditation and sit for the same qualification examinations as the monks.

Thilashins observe the ten precepts and can be recognized by their pink robes, shaven head, orange or brown shawl and metal alms bowl. Thilashins would also go out on alms round on uposatha days and receive uncooked rice or money.

Thilashins often reside in either separate quarters or in segregated kyaung (temple-monasteries). They do not have to look after the monks, but may help cook if required. Although ranked lower than the monks, they are not subservient to them.
© Istvan Kadar Photography
User Agreement
Cancel
Continue