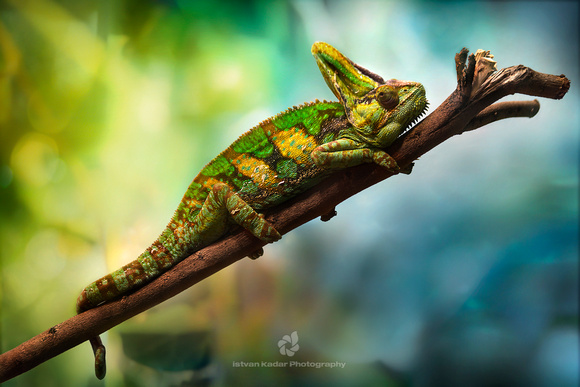 These lizards are found in the greenest portions of the south western Arabian Peninsula from Asir province in Saudi Arabia to the border of South Yemen.

Veiled chameleons are mainly insectivores. They will consume anything that is small and moves. They are particularly fond of insects, flies, caterpillars, butterflies, slugs, and worms, along with leaves, young shoots, and blossoms when they need further hydrating. With suitable habitat shrinking, they have moved onto agricultural lands eating millet in particular.

The chameleon changes its colours quickly using layers of cells (chromatophores) found in the skin. Under the clear epidermis, which sloughs off in ragged pieces throughout life, is a layer of yellow and red cells below which are blue and white reflector cells. In a third layer are cells that produce brown and black. These are activated by nerve impulses and hormones and can be reflected and arrayed in numerous shades. How these are arranged into patterns is as important as the colours themselves. They allow chameleons to send many different messages: sexual identity, mating readiness, physical well-being, and emotional states.

Increased agricultural expansion and human settlement has greatly reduced the veiled chameleon’s habitat. Because they are slow moving creatures, these chameleons have evolved in a small pocket of greenery surrounded by desert which is rapidly being degraded. They are being pushed onto farm land and into trees along the sides of roads. While numbers are still plentiful, it is not clear how severely they will be affected by the use of pesticides. As well, this very colourful lizard is much sought after by the pet trade, and lizard parts are used in rituals and as curios. Veiled chameleons are preyed upon by birds and snakes in the wild.
© Istvan Kadar Photography
User Agreement
Cancel
Continue