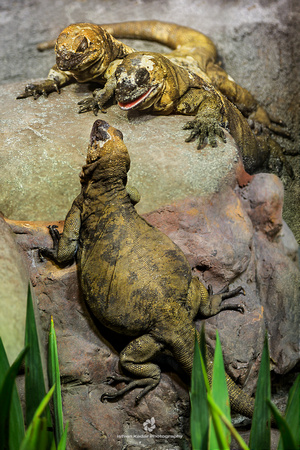 The San Esteban Chuckwalla is endemic to San Esteban Island in the Gulf of California. While it is abundant on this small island, it occurs naturally nowhere else and is protected under the Endangered Species Act. At one time, the Seri translocated populations of this lizard to other islands in the Sea of Cortés as a food item, but none of these populations has survived beyond the original population found on San Esteban.

The San Esteban Island chuckwalla is the largest of its kind. Length: up to 64 cm. Weight: approx 2 kg.

These omnivores prefer creosote and prickly pear blossoms as well as kittlebush leaves but will consume many types of leaves, fruits, buds and seeds. Occasionally, they will take small invertebrates.

Chuckwallas need to maintain a high level of body heat in order to remain active. After the coolness of the desert night, they will seek basking rocks or warm sand by which to raise their body temperature. During this time these chuckwallas cannot move with agility and are vulnerable. Their eyes, placed back on the head and facing outwards gives them good peripheral vision, a defense against attack.

A number of different factors lie behind the endangerment of the San Esteban chuckwalla. Many were captured for the ever escalating U.S. pet trade. In addition many are being killed by uninformed people who confuse them with the poisonous Gila monster. However, the most devastating threat lies with the introduction of invasive species and the resulting degradation of desert habitat. Originally, herbivorous and predatory mammals were absent from San Esteban. Both by accident and willfully, feral cats now roam this island, along with livestock, pigs, rats, and rabbits. The result is the hunting of chuckwallas directly by the felines and rodents, and indirectly by the destruction of their habitat through the uprooting, grazing, trampling and consumption of food sources by the invasive animals. Introduced plants, as well, are out competing native creosote, prickly pear and kittlebush shrubs, staples of this lizards diet. Considering that chuckwallas are recent arrivals on San Esteban, they have had insufficient time to adapt. To add to the dilemma, chuckwallas reproduce slowly and have not developed immunity to diseases introduced by invasive species. In addition, they are sought after by birds of prey, coyotes, and rattlesnakes.
© Istvan Kadar Photography
User Agreement
Cancel
Continue