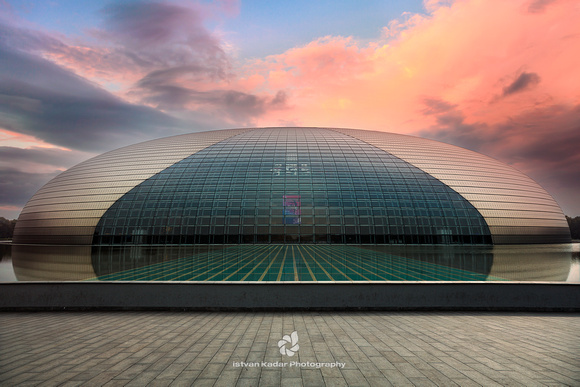 The Egg, more formally known as the National Centre for the Performing Arts is located in Beijing, China. Technically, it’s an ellipsoid dome of titanium and glass surrounded by an artificial lake. The building seats 5,452 people in three halls and is almost 12,000 square meters (129,000 sq ft.) in size. It was designed by French architect Paul Andreu.

The Opera House
The magnificent Opera House is mainly used to stage operas, dance dramas, ballets, and large-scale shows. The arc-shaped metal net wall of the auditorium changes the lights and shadows according to different circumstance to bring the audience into the immersed artistic space with the development of plots. The surface of the ballet stage is made of Oregon timber and its triple-layer construction ensures the greatest possible resilience, helping to protect the feet of dancers. The Opera House can seat 2,416 people.

The Concert Hall
Exuding an air of serenity and refinement, the silver white Concert Hall is the venue for mainly large symphonic and national music performances. The audience can enjoy all performances from any angle. The Concert Hall is home to a giant pipe organ, the “Hall Guardian”, which is believed to be the largest of its kind in China with 94 stops and an impressive array of 6,500 pipes. The over-100-ton white ceiling of the Concert Hall is specially designed to embody an ideal integration between architectural and acoustic aesthetics. The Concert Hall seats 2,017 people.

The Theatre
The Theatre is a tribute to the traditional theatre atmosphere of warmth and hospitality, and stages primarily traditional Chinese operas, stage plays and national song and dance. The vertical stripes in purple, dark red, orange and yellow regularly alternate with each other on the walls to express a sense of vividness in quiet, and imagination in realization. The Theater Hall is used for plays and the Beijing opera. It has 1,040 seats.

The Fifth Space
Among the venues at the National Centre for the Performing Arts are a host of public spaces that are designed to amaze and stimulate. Jointly known as “The Fifth Space”, they include the Underwater Corridor, the Olive Hall, an exhibition gallery, a resource centre, a press room, a terrace lounge, souvenir shops and cafes.