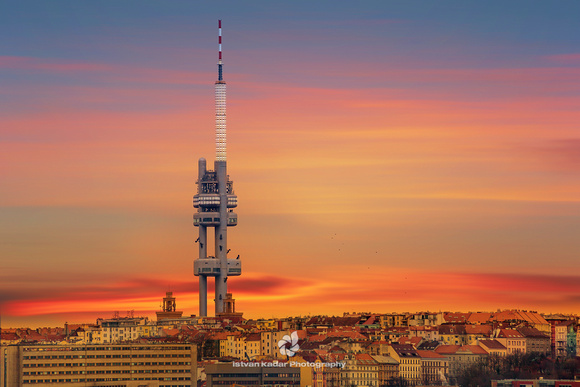 The TV Tower in Žižkov was built between 1985 and 1992 according to the design of Ing. Arch.Václav Aulický and Dr. Ing. Jiří Kozák. Despite critical reactions of local residents who pointed to the contrast of high-tech architecture and the historic neighborhood of Zizkov, the tower was completed. Today, the tower is recognised as a dominant feature of The Prague panorama.

In the years of 2011-2012 the tower undertook a complete refurbishment of its interior. A team of renowned Czech architects and artists were assigned to design the new space and create an interactive environment. The TV Tower was renamed the TOWER PARK PRAHA.

The television transmitter tower is from a technical point of view very unique – the Tower oscillations are eliminated with special pendulums inside the structure, which consists of 3 cylindrical steel tubes and 9 cabins. In these tubes there are situated three cabins, the first at a height of 66 meters, the next one is the Observation cabin at a height of 93 meters and the highest located is the broadcast technology cabin. The base of the building is located at a depth of 15 meters below the surface. The tubes of the tower reach a height of 134 meters.

Since 2000, the babies have become a characteristic part of the tower, namely ten giant babies climbing the tower up and down.The fiberglass sculptures called Miminka (Babies) were originally placed there only temporarily, but they became so popular that they were permanently installed on the tower.
© Istvan Kadar Photography
User Agreement
Cancel
Continue