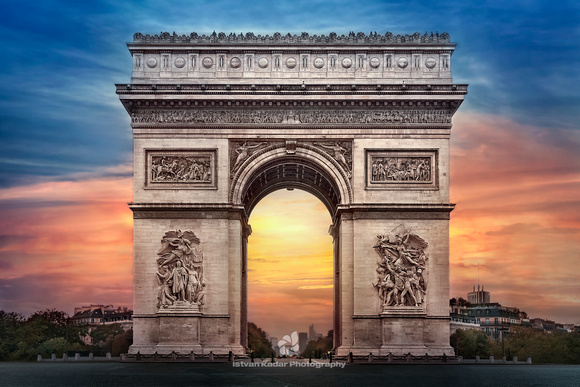 The Arc de Triomphe de l'étoile, the world's largest triumphal arch, forms the backdrop for an impressive urban ensemble in Paris. The monument surmounts the hill of Chaillot at the center of a star-shaped configuration of 12 radiating avenues. It is the climax of a vista seen the length of the Champs Elysées from the smaller Arc de Triomphe du Carrousel in the Tuileries gardens, and from the Obélisque de Luxor in the place de la Concorde.

In 1806, Napoleon I conceived of a triumphal arch patterned after those of ancient Rome and dedicated to the glory of his imperial armies. The structure was designed by Jean François Thérèse Chalgrin (1739-1811), completed in 1833 and inaugurated in 1836 by the French king, Louis-Philippe. Its deceptively simple design and immense size, 49.5 m (162 ft) in height, mark it unmistakably as a product of late 18th-century romantic neoclassicism. The arch also serves as a reminder that Chalgrin was a pupil of Etienne Louis Boullée, the father of visionary architecture. The most famous of its sculptural reliefs is La Marseillaise (1833-36) of François Rude. Specific historic associations notwithstanding, the arch has become an emblem of French patriotism.
© Istvan Kadar Photography
User Agreement
Cancel
Continue