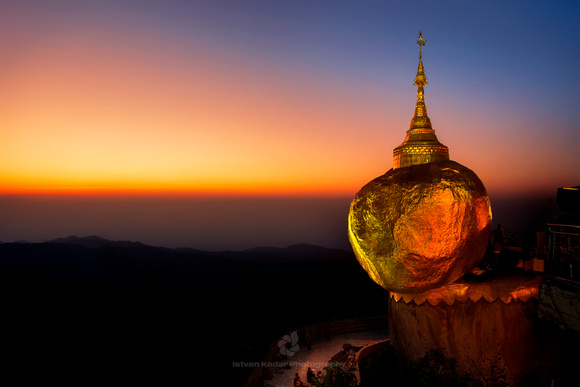 Sundown at the Kyaiktiyo Pagoda, Myanmar

The Kyaiktiyo Pagoda (The Golden Rock) at the top of Mt. Kyaiktiyo is one of the most important pilgrimage sites of Myanmar.

Perched dangerously on the edge of a cliff, pilgrims have been visiting the Kyaiktiyo Pagoda for centuries to meditate and give offerings to the Buddha.

Whether this worship keeps the boulder from rolling down the precipice is unclear, but the gold-leaf covered stone certainly inspires all who visit. At 25 feet high and 50 feet around, the golden boulder in Mon State, Myanmar is hard to miss.

According to legend, a Buddhist hermit was given a strand of hair from the Buddha himself, which he then gave to the king. For his gift, the king offered the hermit a boulder shaped like his head, and used magical powers to pull the boulder from the ocean. The king then built the small pagoda atop the rock to enshrine the Buddha's hair for all eternity and pilgrims have flocked to the site ever since.
© Istvan Kadar Photography
User Agreement
Cancel
Continue