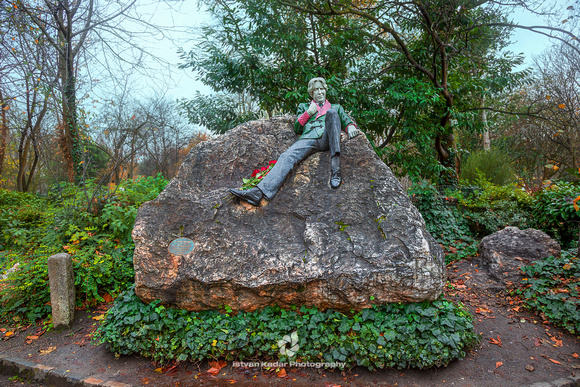 The Oscar Wilde Memorial Sculpture is a collection of three statues in Merrion Square in Dublin, Ireland, commemorating Irish poet and playwright Oscar Wilde. The sculptures were unveiled in 1997 and were designed and made by Danny Osborne.

The statue was formed from different coloured stones from three continents. The torso is of green nephrite jade from British Columbia, Canada, and pink thulite from Norway. The legs are of Norwegian Blue Pearl granite with the shoes being black Indian charnockite and finished with bronze shoelace tips. The statue also wears a Trinity College tie made from glazed porcelain, and three rings – Wilde's wedding ring and two scarabs, one for good luck, the other for bad luck. The porcelain head was replaced by a new one made of white jadeite, because cracks were forming on it. The statue is mounted with Wilde reclining on a large quartz boulder obtained by Osborne himself from the Wicklow Mountains.

Another distinction is the figure's facial expression, which, disrupting the realism of the figure, might be described as a rather contorted sneer. Intended by the artist to represent two antithetical sides of Wilde, one half of his face is smiling widely ... while the other bears a sombre expression ... and this divide is echoed in his posture on either side. Because of its positioning at the corner of the park on the turn of the outer pathway, the visitor to the monument sees one side of Wilde when approaching and another when walking away. One is the witty Wilde who is most often remembered in popular culture, the other the "broken man" he became following his two-year incarceration for committing homosexual acts.
~ Wiki
© Istvan Kadar Photography
User Agreement
Cancel
Continue