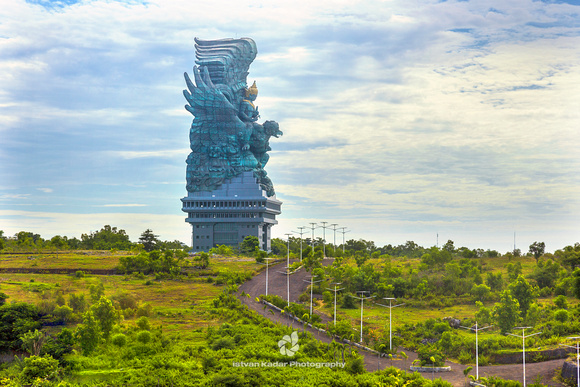 One of the largest statues in the world is taking shape on a hill overlooking the international Bali airport. It was officially inaugurated on August 28, 2018.
The figure represents the God, Wisnu, riding the mythical bird, Garuda, which is a source of wisdom and preservation in the Hindu religion, a religion practiced in Indonesia millennia ago, before the advent of Islam.

In order to complete the enormous copper and brass sculpture, the project required more than 20 years of work. Moreover, it fundraised more than $100 million from private benefactors.

The statue, which stands 121 meters tall, is 30 meters taller than the Statue of Liberty in New York. However, Garuda is almost as wide as it is tall, with a 64-meter wingspan, and a total weight of 3,000 tons. The impressive structure was designed and constructed by an important Indonesian sculptor named Nyoman Nuarta.

One of the parts that make this statue spectacular are the custom Sicis mosaic decorations, seen on the majestic headgear of the God, the necklace that adorns him and the two shoulder pads.
© Istvan Kadar Photography
User Agreement
Cancel
Continue