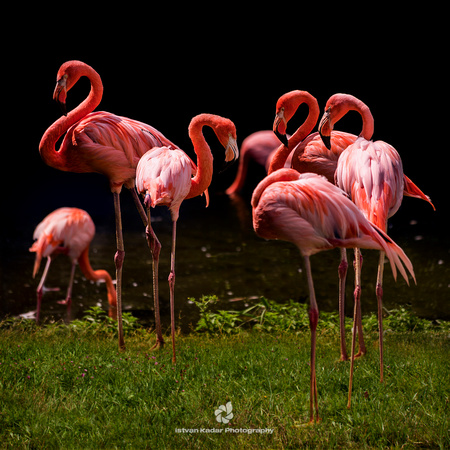 American flamingos have the brightest plumage of all the flamingo species - they are deep pink in colour. They can be bright orange/red. The intensity in colour is determined by the amount of pigment in their food, this varies with location being dependant on what they eat.

The American flamingo is found in Central and South America and the Caribbean. It is also occasionally seen in Florida and along the Gulf Coast as a vagrant.

They live close to water with a very high salt content, which also means they have few natural predators being able to survive in the same areas. Long legs allow the bird to wade into deep water. The webbed feet help them to balance. They will frequently stand on one leg, tucking the other close to the body.

These birds are very gregarious. Smaller nesting colonies may contain fifty or so birds, larger ones can contain thousands. They are very social and interactive. A behaviour, such as preening may influence an entire colony, (if one flamingo is performing this activity the whole colony will follow along). The entire colony will assist in the raising of the young, and teach them how to swim and feed. They have several vocalizations similar to those of geese.
© Istvan Kadar Photography
User Agreement
Cancel
Continue