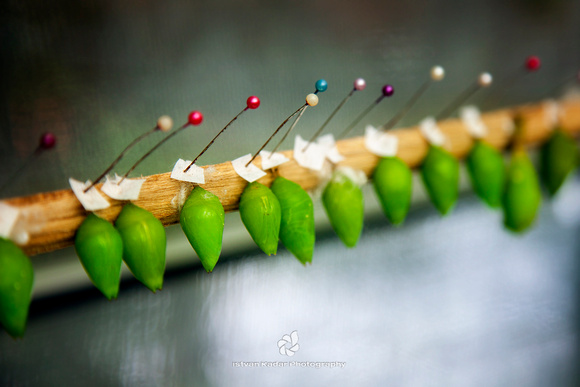 When the caterpillar is fully grown, it makes a button of silk which it uses to fasten its body to a leaf or a twig. Then the caterpillar's skin comes off for the final time. Under this old skin is a hard skin called a chrysalis. Because chrysalides are often showy and are formed in the open, they are the most familiar examples of pupae. Most chrysalides are attached to a surface by a Velcro-like arrangement of a silken pad spun by the caterpillar, usually cemented to the underside of a perch, and the cremastral hook or hooks protruding from the rear of the chrysalis or cremaster at the tip of the pupal abdomen by which the caterpillar fixes itself to the pad of silk.

Like other types of pupae, the chrysalis stage in most butterflies is one in which there is little movement. However, some butterfly pupae are capable of moving the abdominal segments to produce sounds or to scare away potential predators. Within the chrysalis, growth and differentiation occur. The adult butterfly emerges (ecloses) from this and expands its wings by pumping haemolymph into the wing veins. Although this sudden and rapid change from pupa to imago is often called metamorphosis, metamorphosis is really the whole series of changes that an insect undergoes from egg to adult.
© Istvan Kadar Photography
User Agreement
Cancel
Continue