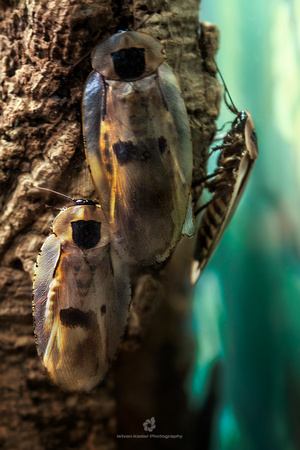 Blaberus Giganteus is considered one of the largest cockroaches in the world, with males growing to reach lengths of 7.5 cm and females 10 cm. This species is endemic to Central America and northern South America, and can be found in the rainforests.

Prior to mating, the female emits an explosive sex pheromone, which initiates long courtship rituals in males. The male raises his wings at right angles to his abdomen, and begins trembling his abdomen. If the female is enticed, the pair then join, in an end-to-end position, which they may stay in for several hours. Males will often fight over the females, sometimes to the death. When mating is complete, the female is pregnant for life. Adults can live up to 20 months.

Cockroaches play a very integral ecological role in their rainforest homes, by helping to decompose forest litter and animal fecal matter and are, in turn, food for many other animals. The cockroach dates back over 200-300 million years, and is one of the most adaptable and resilient of all animals.
© Istvan Kadar Photography
User Agreement
Cancel
Continue