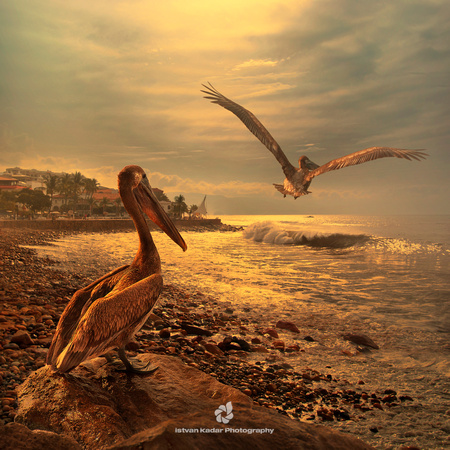 The Brown Pelicans in Puerto Vallarta

Very few birds attract attention like Pelicans do. Soaring high in the sky in flocks, forming a near perfect “V” or diving abruptly within a school of fish. They are simply amazing.

As we sit quietly by the ocean, watching their acrobatics, one can only be reminded of those prehistoric birds, leaving us to ponder on what the world was like back then. Their sheer size with their wing span of around 6 ½ feet and the grace with which they fly leaves us mesmerized.

Here in the bay, I doubt you’ll find an area where they cannot be found. They are just everywhere you look, perched on a fisherman’s boat, a tree, a dock or just sitting there in the water, floating near the beach.

The fishing technique they use is a difficult one for the juveniles and occasionally, once on their own, some juveniles die of starvation for lack of having mastered the technique. In order to feed, the pelican will dive down amongst a school of fish and open its beak just before they impact the water, causing great quantities of water and some fish to accumulate inside the gular sac. They also keep their wings somewhat open and this may serve as a breaking system in order to avoid going too deep and allowing them to fish in shallow areas where small fish are more plentiful. The tricky part happens when they close their beak, keeping their head submerged and attempt to remove the water by pushing the gular sack inward with their beak and at the same time try to retain the fish.

Nature is disappearing at an alarming rate. Let’s all give a helping hand in keeping our oceans and beaches clean. Let’s make sure our mangroves and coastal environments remain populated with these spectacular birds which we would dearly miss should they one day disappear. They are not as yet threatened and that is good but it is our responsibility to make sure that they never are.