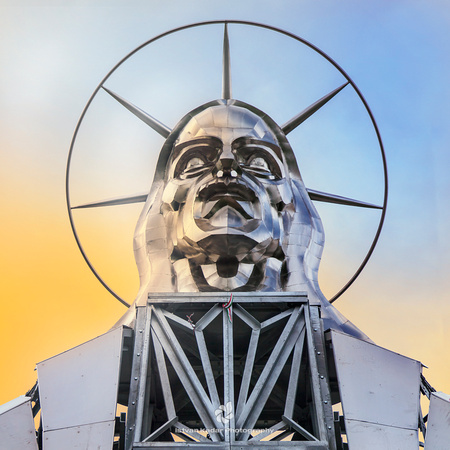 The 'Heart of Jesus' look-out is a work of art in the form of a statue depicting Jesus Christ, located on the outskirts of Farkaslaka (Lupeni) a village in Harghita County, Transylvania. The stainless steel 22-meter-high statue can be found on top of Gordon Hill (some 953 meters above sea level), it is the highest statue in Eastern Europe, representing Jesus Christ. The statue was designed by the sculptor Walter Zawaczky, erected in December 2011.
Within the sculpture's body, a central spiral staircase leads to the statue's head, from where you can look out on beautiful landscape vistas.

The work has received numerous criticisms, mainly because of it's enormous size and appearance, dividing the opinions of locals and press alike.
According to some opponents, the metal sculpture is completely alien to the surrounding landscape and Szeklers* tradition; perhaps in keeping with local materials, stone or wood would have been a more appropriate choice of materials. Some have named the statue 'The Tin of Christ', which is perhaps a more negative evaluation; although many feel the creation emanates a truly religious experience. Many supporters of the statue think it will make for a great tourist attraction, and in time it will be considered a landmark synonymous to the area.