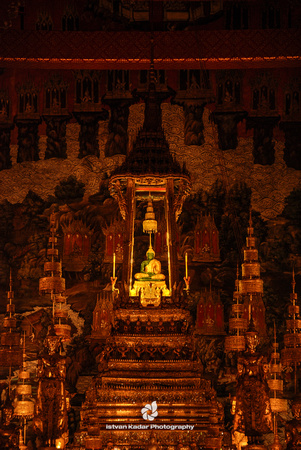 The Emerald Buddha is the palladium of the Kingdom of Thailand, a figurine of the sitting Buddha, made of green jadeite (rather than emerald), clothed in gold, and about 45 cm tall. It is kept in the Temple of the Emerald Buddha (Wat Phra Kaew) on the grounds of the Grand Palace in Bangkok.
According to the legend, the Emerald Buddha was created in India in 43 BC by Nagasena.

The Emerald Buddha itself is simply the Jadeite statue, but it is adorned with garments made of gold. There are three different sets of gold clothing, which are changed by the King of Thailand or a liaison in a ceremony at the changing of the seasons (around March, July and November). The three sets of gold garments correspond to Thailand's summer season, rainy season, and cool season.

In this image you see the Emerald Buddha in clothes for rainy season.
© Istvan Kadar Photography
User Agreement
Cancel
Continue