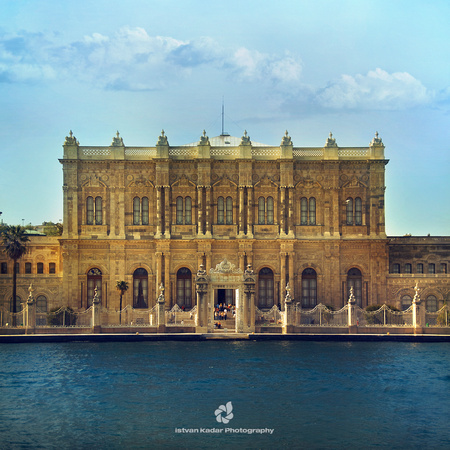 The Dolmabahçe Palace in Istanbul, Turkey, located at the European side of the Bosporus, served as the main administrative center of the Ottoman Empire from 1856 to 1922, apart from a twenty-year interval (1889-1909) in which the Yıldız Palace was used.
The Dolmabahçe Palace was ordered by the Empire's 31st Sultan, Abdülmecid I, and built between the years 1843 and 1856. Hacı Said Ağa was responsible for the construction works, while the project was realised by architects Garabet Balyan, his son Nigoğayos Balyan, and Evanis Kalfa. The construction works cost five million Ottoman mecidiye gold coins, the equivalent of 35 tonnes of gold. Fourteen tonnes of gold in the form of gold leaf were used to gild the ceilings of the 45,000 square metre monoblock palace, which stands on an area of 110,000 m².