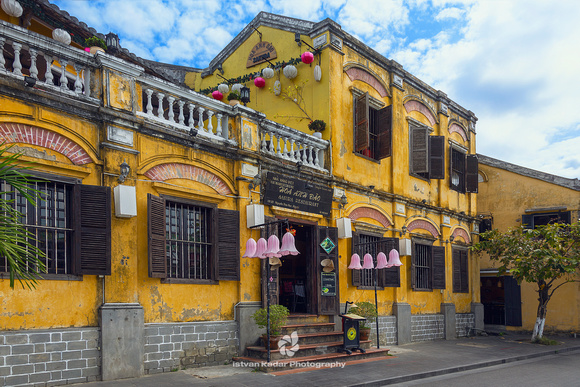 Hoi An’s is a unique architectural amalgamation, not seen elsewhere in the country. In particular, Japanese, Chinese and French influences are evident in Vietnamese tube houses, which feature Chinese tiled roofs, Japanese support joists, and French louvered shutters and lampposts. The town is a mosaic of cultures and yet a synthesis of all the influences, thus holding an inimitable position in the country.

Hoi An developed most of its uniquely eletric townscape between 16th and 19th centuries. During most of this time, it was a major paport open to several foreign influences. The Japanese established a community west of the Covered Bridge during the 16th century, while the Chinese founded many communities in the center and east of town in the 18th century. Japanese and Chinese influence can be seen on the town’s building. Later, the French left a distinct colonial stamp on the southestern part of town. Over the years, many elements of these diverse architectural styles blended harmoniously with indigenous Vietnames features. Hoi An was relatively untouched by the Vietnam War, and so the old world charm is still in place.
© Istvan Kadar Photography
User Agreement
Cancel
Continue