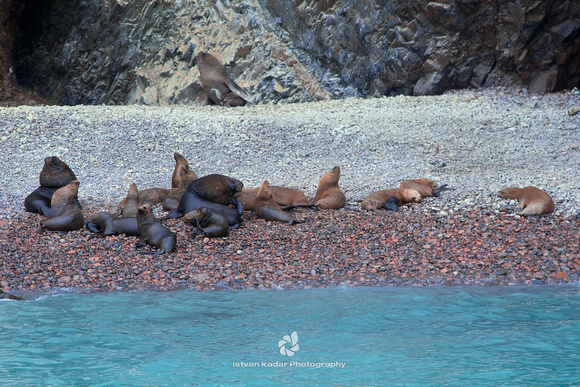 South American Sea Lions have a patch of short hair around their large heads that is similar to what a lion’s name starts out to be. It is a common mistake that only the males have them. They do have one that is fuller though and lighter in color.
When they are full grown they will be twice the size of the females. The males are approximately 9 feet (2.7m) long and weigh close to 800 pounds (362kg).

These Sea Lions feed on the various types of fish that are found in this area. Their main diet is anchovies and hake. They are also very fond of both squid and octopus. When these items are scarce they may consume small penguins in the area as well. They tend to hunt within five miles of the shore but they will go further out if necessary in order to fine enough food.

For these Sea Lions the mating process occurs from August to December. The males are very aggressive when it comes to herding females into their harems. Most of these females will already be pregnant from the last mating season. Soon after giving birth they will mate. Males that don’t have a harem of their own may band into groups and try to take over mating with females. They are also known to kill the young pups in the group due to feeling threatened by them.
© Istvan Kadar Photography
User Agreement
Cancel
Continue