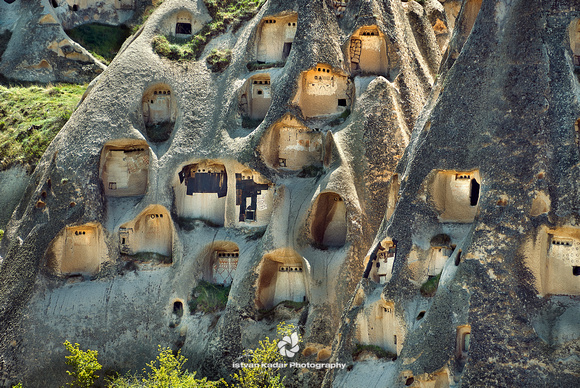 Ancient volcanic eruptions blanketed this region with thick ash, which solidified into a soft rock—called tuff—tens of meters thick. Wind and water went to work on this plateau, leaving only its harder elements behind to form a fairy tale landscape of cones, pillars, pinnacles, mushrooms, and chimneys, which stretch as far as 130 feet (40 meters) into the sky.

But human hands performed equally incredible works here. The rocky wonderland is honeycombed with a network of human-created caves; living quarters, places of worship, stables, and storehouses were all dug into the soft stone. In fact, tunnel complexes formed entire towns with as many as eight different stories hidden underground.