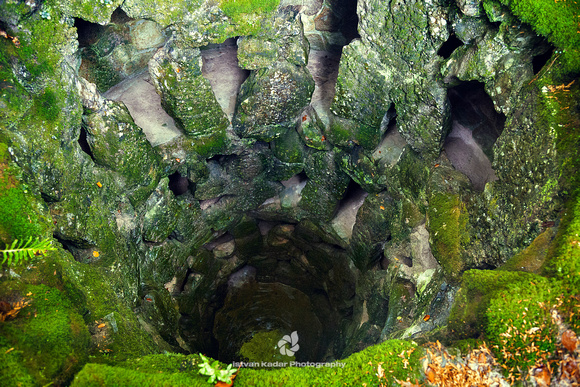 The pair of wells, known as the ‘Initiation Wells’ or ‘Inverted Towers’, consist of ‘winding stair’ architecture, which carries symbolic meaning including the death/rebirth allegory common to many hermetic traditions.
One of the wells contains nine platforms, which are said to be “reminiscent of the Divine Comedy by Dante and the nine circles of Hell, the nine sections of Purgatory and the nine skies which constitute Paradise.” A smaller well, called the “Unfinished Well,” contains a set of straight staircases, connecting the ring-shaped floors to one another. It is believed that the spacing of the landings, as well as the number of steps in between were dictated by Masonic principles.

These wells never served as water sources. Instead, they were used for ceremonial purposes that included Tarot initiation rites. The tunnels described above connect these wells to one another, in addition to various caves and other monuments located around the park.
© Istvan Kadar Photography
User Agreement
Cancel
Continue